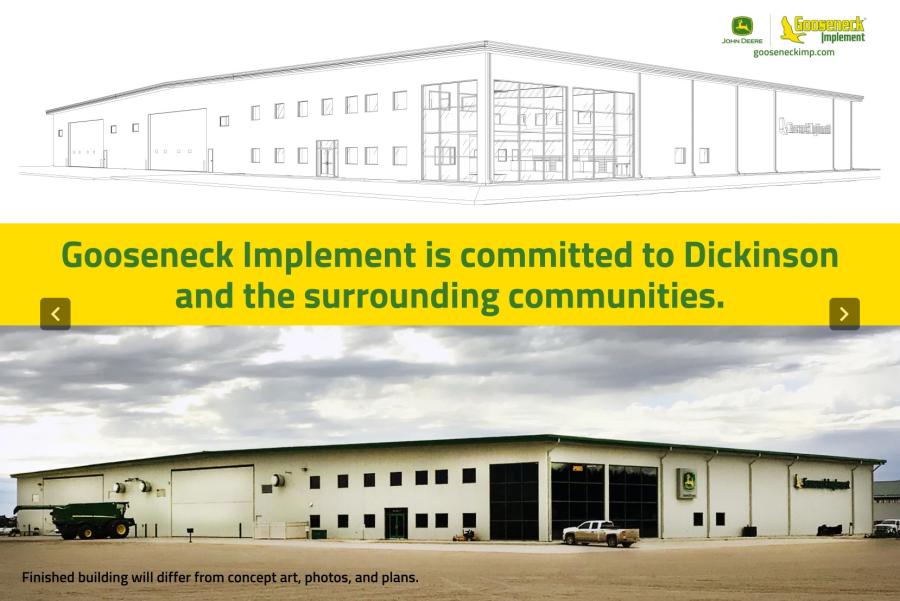 Gooseneck Implement has announced plans to build a new dealership in Dickinson, N.D.

This new location will house the parts, sales and service all in one location. This new investment will allow for many improvements such as better efficiencies amongst the departments, improved parts storage and increased space for parts availability, as well as a safer work environment for the Gooseneck employees, according to the company.

"We're excited to bring a new location to the Dickinson Community," said Matt Leake, Dickinson store manager. "This opportunity will give our customers state of the art facility for service, parts and sales."

The location in Dickinson provides support to farmers in six counties across south western North Dakota and nearly 4,481 farmers and ranchers.

"For those farmers and ranchers that work in acres, not in hours, we thank you. We are very grateful for your continued patronage because we wouldn't be here without loyal customers like you," said Leake.

Deere & Company has made a minority investment in Hello Tractor, an ag-tech company based in Nairobi, Kenya.

The Consumer Technology Association (CTA) announced the first keynote speaker for CES 2023. John Deere Chairman and CEO John May will join other John Deere executives to share how purpose-driven sustainability and advancements in technology are addressing one of the world's greatest challenges — feeding a growing global population.

John Deere announced updates to its 5 Series Utility Tractors, which include more options to make it easier for rural property owners, farmers, ranchers and fleet owners to match the right tractor to the many jobs they need that tractor to do day after day.