This new division, named Eagle Power Turf & Tractor, has found much success over the past five years. It now covers Bucks, Chester, Delaware, Montgomery and Philadelphia counties out of two branch locations.

As a first step in April 2017, Eagle Power & Equipment, based in Montgomeryville, Pa., purchased Histand's Equipment in Doylestown, Pa. Histand's served the communities of Central Bucks and Montgomery County for nearly 90 years.

"We have been a Kubota dealer for 12 years now and have had great success," Eagle President Matt McDonald said. "We were looking for a way to offer the entire Kubota line, which includes the turf and tractor products The acquisition of Histand's was the perfect opportunity to do that. It allowed us to have a location within our existing territory where we could utilize the experience and expertise of the Histand's team — and they had a loyal customer base."

Working with a customer base made up of professional landscapers, Eagle Power Turf & Tractor's next phase of growth focused on the western Philadelphia suburbs. Its efforts were rewarded when it bought Conway Power in early 2021, a Kubota dealer in West Chester, Pa. As with the previous acquisition, of most importance was the experienced employees of Conway Power be retained and customer relationships protected.

But the relatively new turf equipment dealership knew that the key to its viability was bringing on capable sales professionals with a long track record of success in the industry — someone like Ken Haas.

A veteran of 25 years in selling construction and turf equipment, Haas has helped shepherd the creation and growth of Eagle Power Turf & Tractor since initially coming aboard in 2017 as the outside sales representative for the dealership in a territory that included Bucks, Montgomery and Philadelphia counties. 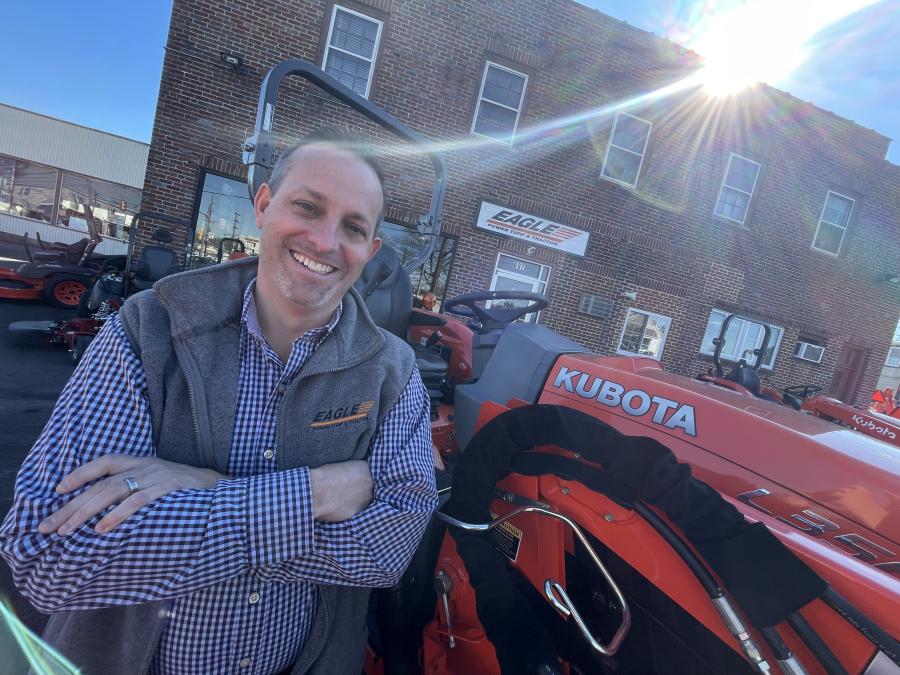 After almost four years, his abilities led Eagle Power to name Haas as sales manager of the turf equipment division at the same time the West Chester store was acquired last year.

Prior to joining Eagle Power, he had worked for Hertz Equipment Rental and Detlan Equipment and had been selling John Deere equipment for the latter.

"I was looking to make a move," he said, "and I have known Jim Lutz, sales manager for Eagle Power, since high school. He had mentioned to me that Eagle Power was acquiring Histand's at the time."

Haas added that company president Matt McDonald called him shortly afterwards to discuss the possibility of Haas working for the new company as an outside sales rep.

"We sat down and spoke about what they wanted, and it lined up with the vision I had and where I wanted to get to in my career," he said.

After getting settled into his new role at the turf equipment dealership, Haas found how much he enjoyed taking on the responsibility of all sales-related matters for the company.

"Everything goes through me," he said, noting that he has seven or eight salespeople that report to him. "That includes staffing and pricing, and I work closely with the equipment manager to make sure that we have the correct product mix and the right amount of equipment on order. It is all about providing the best solutions for our customers.

"It has been extremely rewarding to be able to help our sales personnel accomplish their goals, even though I have only held the position for a short period of time."

Landscapers Can Find Anything They Need at Eagle Power

Although most of its customers are residential and commercial landscapers, Eagle Power Turf & Tractor also caters to those professionals that specialize in creating hardscapes — structures within landscaping that are made of gravel, brick, wood, pavers or stone.

Those people rely on the diverse line of products and service offered at both branches of Eagle Power. Although the roster is headlined by Kubota, many other manufacturers recognizable to the landscaping industry are represented at the dealership, too.

"When we bought Conway's West Chester store, we also picked up other lines, such as eXmark mowers, and Scag professional lawncare equipment," Haas said. "BOSS and Ariens snow removal products are carried by us, and we are a dealer for BCS, DR, Echo, RedMax, Stihl, Ferris, MacKissic, Toro, Toro Dingo loaders, Land Pride agricultural machines, and Wallenstein power equipment, just to name a few. In southeastern Pennsylvania, in our opinion, we currently have a tremendous product mix that covers many of the most respected lines in our industry. We are very excited to see where this is heading."

Eagle Power Turf & Tractor also has established a loyal following among many local school districts, colleges and municipalities from the deals it has in place to sell and service turf equipment for their grounds.

Haas noted that in the West Chester market, the company works with many townships, school districts and universities. The area has a great number of commercial landscape companies that count on dealerships like Eagle Power Turf & Tractor to keep their crews on the road. 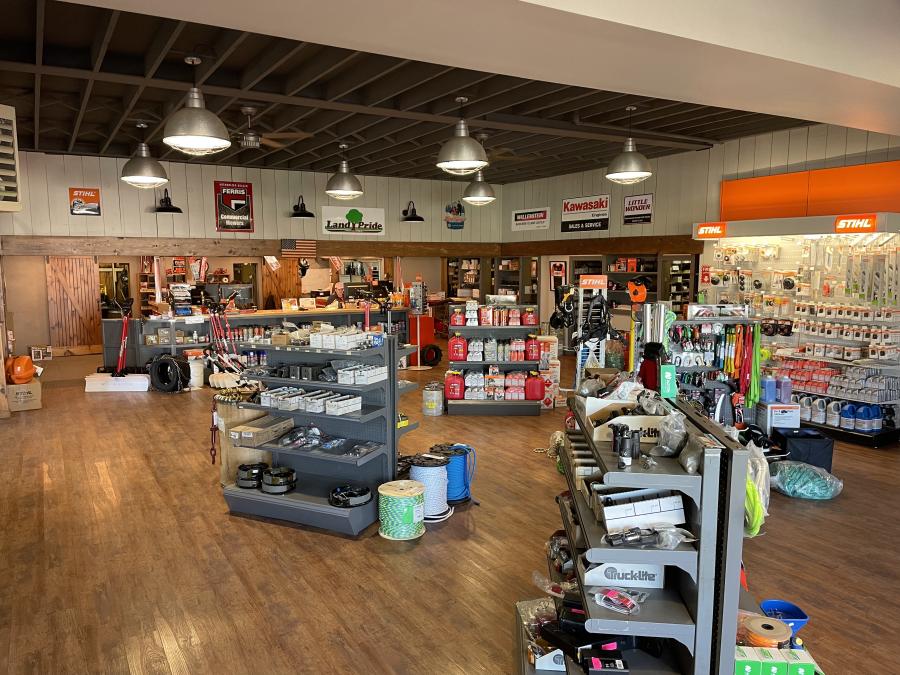 Eagle Power's goal, Haas said, is to work with the local communities and townships to make it easier for them to do business.

"The same thing is true in the Doylestown market, where we supply the borough and local community colleges with the equipment they need," he said. "We want to be very positive to the local community and a supporter of community events. It also helps us to do business in those areas."

"I would say, if you are talking about tractors, the primary line we sell is made by Kubota. In West Chester, the eXmark zero-turn mowers are extremely popular with municipalities. As far as our hand-held lawn tools in this market, like blowers, chainsaws, clippers and trimmers, the products from Echo and Stihl are popular with the townships and their parks departments."

When Haas became sales manager for the entirety of Eagle Power Turf & Tractor in 2021, he played a key role in helping minimize the disruption to its new customers in West Chester as the Conway Power store transitioned to an Eagle Power branch. This not only included the integration of business systems and sales records, but physically moving all products and furnishings to a new store location along Phoenixville Pike. Weeks' worth of plans had to be implemented over the course of a single weekend to be ready for the start of business hours on Monday.

"When we moved the Conway inventory to our current building in West Chester, it was done over just one weekend," he said. "We closed the old business on a Friday and opened the new Eagle Power branch the next Monday. We brought all the Conway employees over, too, because of their wealth of knowledge about the turf equipment business."

He added that the former Conway store also had a rich commercial customer base, as well as product lines like eXmark and BOSS.

Due to territory commitments, though, some of Eagle Power's equipment lines can only be sold at one branch and not at another for the time being, he added.

"For instance, we cannot offer eXmark in Doylestown. There are dealers [in that area] that have the rights to that line. Similarly, there are also some product lines that we sell at the West Chester branch that we do not sell in Doylestown."

That has not stopped the positive customer feedback that Haas said Eagle Power has heard over the past year about its West Chester operation.

"So far it has been great," he said. "Matt McDonald and I have gone out and met some of Conway's former customers to ease their minds about the transition. When those folks come in, they are still seeing the same faces that they did when they went to the old facility. The comfort level that they had dealing with Conway's people — now our professionals — remains." CEG

A successful hay season starts with industry-leading equipment. While Case IH RB5 series round balers, DC3 series disc mower conditioners and the small square baler family have long-delivered the reliability and efficiency producers can count on, new models and upgrades to each lineup — as well as the addition of an all-new, high-efficiency Professional (Pro) series of round balers — further improve that reliability.

Buyers Out in Force for RES Auction Services' Ohio Sale →

RES Auction Services conducted its construction and ag equipment consignment auction at its 64-acre facility in Wooster, Ohio, on Sept.

AGCO Corporation, a global leader in the design, manufacture and distribution of agricultural machinery and precision ag technology, is bringing the seventh generation of Fendt 700 Vario series tractors to North America.

Fairbanks Scales Inc. , the oldest scale company in the United States and a world leader in weighing equipment, announced it will be showcasing several industrial scales at the Farm Progress Show, Aug.

CLAAS of America announced the launch of two machines designed specifically for farm business operators who are looking for superior performance and excellent return on investment.