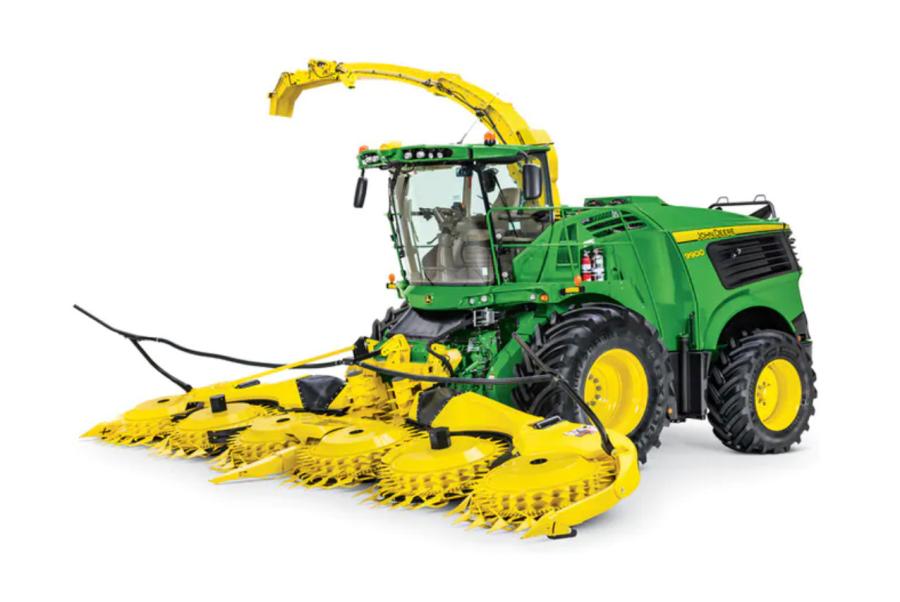 Do we need more horsepower for a forage harvester?

The John Deere 9900i, a 956-hp behemoth, is the largest model of self-propelled forage harvesters it offers. But more horsepower for a forage harvester? That remains a question, writes Chris Torres in the American Agriculturist. If a recent meeting at New York Farm Show was any indication, it's an open question.

"I think the one thing is that the higher-horsepower question is still open for a lot of people, which means that they want a little bit more capacity," said Tim Meister, John Deere's marketing manager of self-propelled forages and heads. "But it's not for everybody, so that's one of the things that we have to weigh, is how many people are actually looking for more productivity than we have today."

Meister and Chase Milem, the company's marketing manager for hay and forage, met with about 100 growers and dealer representatives at the show. Other similar John Deere face-to-face events have been held in Texas, Iowa and Wisconsin, with another scheduled in Michigan. Meister said these events get customer feedback on current products, as well as future projects.

It's been three years since the company launched its 9000 series self-propelled forage harvesters at Farm Progress Show in Boone, Iowa. These forage harvesters — ranging from the 9600 at 616 hp to the 9900 at 957 hp — can handle more than 400 tons of forage per hour and have Tier IV-compliant engines.

Meister said the trend to final Tier IV standards on self-propelled forage harvesters has matured. Now the focus is on developing better technologies to take over more functions on each machine.

Milem was vague on whether the company was launching any new forage products later this year, only saying that "some new things are coming." About two years ago, the company saw a complete reorganization, which he said has better focused the company's hay tools and forage segment.

Meister said the amount of equipment especially on today's large dairies means there are opportunities for the company in this segment.

"A lot of people are doing more than just custom harvesting. They're doing custom planting. They may have custom combining, and it's a lot more diversified, so the portion of the customer segments that we work in with being a traditional dairy that owns a forage harvester and/or traditional contractors in New York, they're buying a lot more equipment than just a self-propelled forage harvester. And I think that's a unique situation that we don't always see on, I would say, a traditional grain farm in the middle of Iowa."

A successful hay season starts with industry-leading equipment. While Case IH RB5 series round balers, DC3 series disc mower conditioners and the small square baler family have long-delivered the reliability and efficiency producers can count on, new models and upgrades to each lineup — as well as the addition of an all-new, high-efficiency Professional (Pro) series of round balers — further improve that reliability.

Buyers Out in Force for RES Auction Services' Ohio Sale →

RES Auction Services conducted its construction and ag equipment consignment auction at its 64-acre facility in Wooster, Ohio, on Sept.

AGCO Corporation, a global leader in the design, manufacture and distribution of agricultural machinery and precision ag technology, is bringing the seventh generation of Fendt 700 Vario series tractors to North America.

Fairbanks Scales Inc. , the oldest scale company in the United States and a world leader in weighing equipment, announced it will be showcasing several industrial scales at the Farm Progress Show, Aug.

CLAAS of America announced the launch of two machines designed specifically for farm business operators who are looking for superior performance and excellent return on investment.